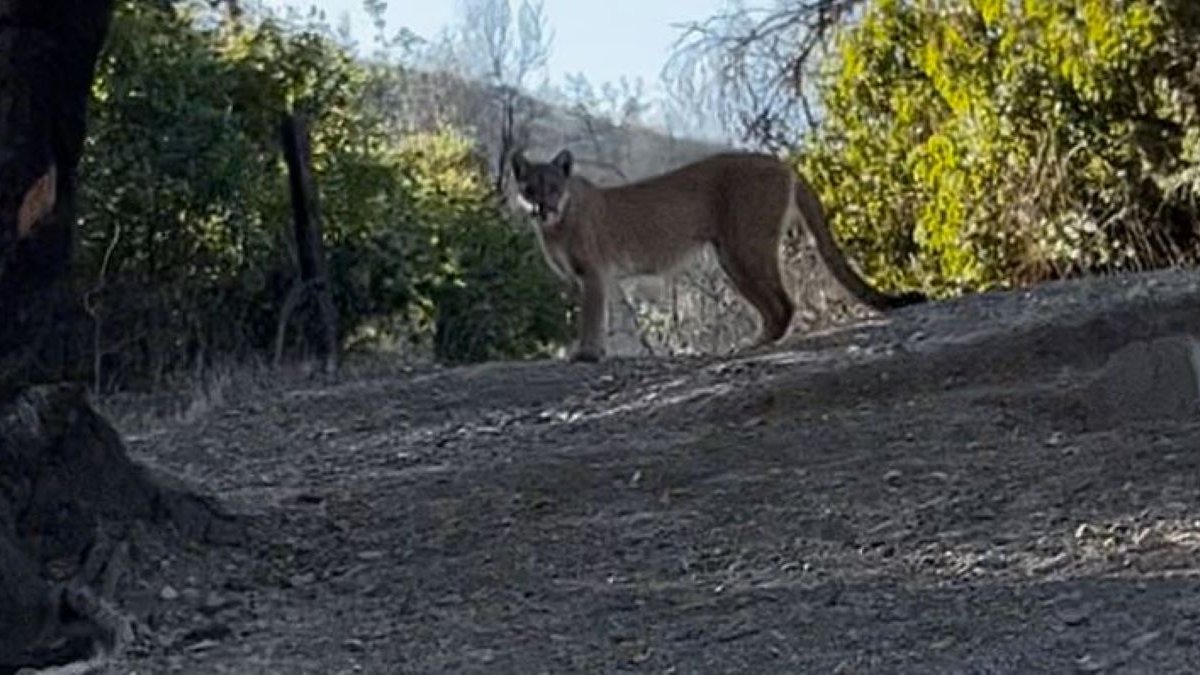 A close encounter of the big cat kind was captured on camera in Malibu.

A group of hikers came face-to-face Thursday with a mountain lion on a trail in the Nicholas Flat area near Decker School Road.

Austin Podrat and his 6-year-old daughter were part of the hiking party. She was playing with other children near a pond when they were surprised by a mountain lion who appeared behind them.

“When I turned around to walk out, with the group right behind me, I took three steps and I found an adult mountain lion 5 feet from us to my right,” Podrat said in an email to NBCLA. “It had certainly crept up behind us while the kids were playing and likely was intrigued by the sound of young children.”

The mountain lion eyed the group, ran about 25 feet, then stopped again and stared back at the hikers. That’s when Podrat captured video and photos that show the big cat eventually turning around and running off out of sight as someone shouted, “Get outta here.”

“This event was quite concerning due to the fact that the mountain lion certainly was not there when we approached the lake and had crept within only 5 feet of us during the time we were playing with the kids,” Podrat, who has explored the coastal mountains for decades, said. “I have lived and explored these mountains for 42 years and never come across one until today.”

There are about 4,000 to 6,000 mountain lions in California, but wildlife officials call that a crude estimate without an ongoing statewide study. More than half of the state is considered prime habitat for the big cats, which can be found wherever deer are present.

The California Department of Fish and Wildlife receives hundreds of mountain lion sighting reports each year. Few result in mountain lions being identified as posing an imminent threat to public safety, the department said. Mountain lion attacks on humans are extremely rare and their nature is to avoid humans.

A 7-year-old boy was attacked by a mountain lion while he was at Pico Canyon Park in Stevenson Ranch, according to authorities. The boy was hospitalized and treated for bite wounds.

Here’s a list of recommendations if you do encounter a mountain lion in the wild.

It is estimated that the mountain lion population in the Santa Monica Mountains could become extinct within 50 years without an influx of genetic diversity. The lions are largely isolated due to freeways that act as barriers to movement across the region.

Conservationists hope the $85 million Wallis Annenberg Wildlife Crossing, which will span the 101 Freeway in Liberty Canyon near Agoura Hills, will alleviate the problem when it is completed in 2025. It will be the largest crossing of its kind in the world — a fully landscaped passage for wildlife that will stretch 210 feet over 10 lanes of highway and pavement.

The crossing aims to provide a connection between the small population of mountain lions in the Santa Monica Mountains and the larger and genetically diverse populations to the north.

No comments to show.